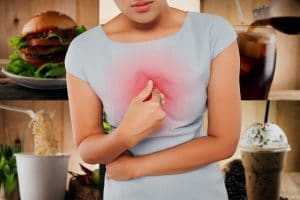 Acid reflux, also known as gastroesophageal reflux disease, or GERD, is a relatively common digestive ailment that impacts infants, children, and adults alike. The condition involves the esophageal lining becoming irritated and inflamed due to stomach acid and bile regurgitating into the esophagus. While technically categorized as a disease, don’t panic. From hallmark symptoms like heartburn to somewhat lesser known indicators such as wheezing, coughing, and bad breath, there are a number of simple, natural remedies to help ease and control this often-painful condition.

Available as teas, powders, capsules, and fresh or dried leaves and stems, herbs such as slippery elm bark, marshmallow root, and chamomile can help soothe acid reflux. Containing a thick substance called mucilage, all three of these herbs ease pain and lessen acid damage to tissues by protectively coating the throat and digestive tract.

Another natural treatment for acid reflux is ingesting deglycyrrhizinated licorice (DGL). Licorice is a natural anti-inflammatory that helps soothe mucous membranes, and studies have found that it quickens the healing of intestinal ulcers (a side effect of persistent acid reflux). To ease your symptoms, take a standardized extract of glycyrrhizinated licorice (DGL). When consumed right after meals, this may also help prevent the onset of acid reflux.

At first thought, it may seem as though drinking apple cider vinegar would be counterintuitive and worsen acid reflux. However, the vinegar’s neutral pH of 5 balances out the pH of your stomach and neutralizes acids. It’s imperative the apple cider vinegar is diluted in water.

No more than a tablespoon in a glass of water before or directly following meals is sufficient. Organic, raw apple cider vinegar is best to use, as non-organic apple cider vinegar has been stripped of beneficial natural enzymes and proteins through pasteurization.

The sugar molecules found in aloe are known to help heal burns, ulcers, and inflamed intestinal walls. Aloe also contains an abundance of mucilage that acts as a barrier between stomach acid and your delicate esophageal tissue. Aloe juice can be found both online and in many grocery stores, but purchase one that does not contain added citric acid that may exacerbate your acid reflux.

In some individuals, aloe juice may act as a natural laxative. Try drinking small amounts at a time to gauge your body’s response.

Eating large meals forces the stomach to work overtime and produce large amounts of acid to digest everything. As such, smaller meals spread more frequently throughout the day will reduce the volume of acid produced, place less pressure on your stomach, and boost your metabolism, too. Also, avoid laying down for a couple of hours after eating a meal as doing so will further enable acid to travel upward.

Somewhat bland foods such as bananas, oatmeal, and vegetables are easy on the stomach and help balance pH, while also providing fiber that helps you feel full longer and diminishes the desire to overeat. On the other end of the spectrum, acidic, greasy, and sugary foods such as citrus fruits, tomatoes, fruit juices, soda, fatty meats, onions, and coffee should be avoided as much as possible.

This one may sound a bit strange, but moderate exercise has been found to both treat and prevent acid reflux. While moving around may be just about the last thing on your mind when it feels as though a small fiery inferno is blazing in your chest, regular exercise like walking and swimming help take pressure off of your stomach and reduces stress.

Stress, particularly when experienced for prolonged periods of time, produces hormones and chemicals that increase the amount of acid in the stomach while suppressing the production of other necessary substances. Lipids called prostaglandins help shelter the stomach and esophagus from acid damage, act as anti-inflammatories, and aid in healing tissue damage and infections. Stress elevates cortisol levels, which in turn stifles prostaglandins and inhibits your body’s ability to protect and heal itself.

Yoga, meditation, or simply taking a few moments each day to breathe deeply relaxes not only your mind but also your gastrointestinal muscles. Have you ever noticed that when you’re stressed, you involuntarily tense up your abdominal muscles? Doing so places greater pressure on your stomach and can lead to more acid and bile flowing into your food pipe.

Though these natural approaches help treat mild to moderate cases of acid reflux and heartburn, it should be noted that continued, incessant acid reflux accompanied by more advanced side effects like severe pain, sore throat, and vomiting should be discussed with a doctor. If not controlled, GERD can lead to dental erosion, esophagitis, ulcers, and even esophageal cancer.