According to the Centers for Disease Control and Prevention, approximately 230 million people worldwide suffer from asthma. Its prevalence is increasing with pollution cited as a major trigger.

Other triggers include exercise, cold weather, stress, certain foods or drugs and illnesses like colds or flu. One of the most common triggers is allergies. 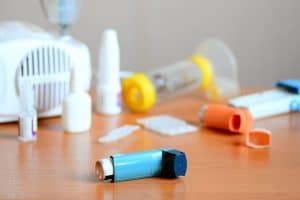 Allergies and asthma often occur together because they both involve an exaggerated immune response. One theory holds that our cleaner lifestyles prevent children from being desensitized to allergens early in life. When they get older, their immune systems overreact to common substances, triggering an allergic (and, often, asthmatic) response.

Allergic reactions affect lungs and airways and often produce mucus that makes it harder for asthmatic patients to breathe. Avoiding asthma triggers is the first defense, but what are some other possible non-medicinal ways to combat this common health problem?

It would seem counterintuitive to encourage asthma sufferers to exert their bodies more, but studies have shown that, when it can be done safely, exercise strengthens the pulmonary system, increasing stamina. This makes the body more resilient against asthma.

Many athletes like soccer star David Beckham, long-distance runner Paula Radcliffe and track star Jackie Joyner-Kersee control their asthma well enough to compete at top levels. Exercise is a good way to combat weight gain, one of the risks leading to the development of asthma.

For those whose asthma is triggered by stress, exercise helps regulate cortisol and other hormones that can adversely affect health. For those with hay fever-sensitive asthma, consider sports like martial arts or bring your activity indoors during high pollen season.

In the nineteenth century, it was noticed that workers in European salt mines rarely got respiratory diseases. This was attributed to the high salt content of the air they were breathing. Salt could reduce inflammation and thin out mucus to make it easier to clear. You don’t need to be a salt miner to get the same benefit.

Many European spas have salt rooms, and the treatment is spreading to the United States and Asia. If you can’t make the spa, salt treatments are available via lamps and inhalers.

Can you eat your way to asthma stabilization? It might be worth giving the following foods a try, even if there isn’t definitive proof that all of them are effective.

Monofloral honey produced in New Zealand is the latest claimed miracle health food. This antibacterial honey derived from the pollen of the manuka bush contains amino acids, minerals, and antioxidants. Honey, in general, is effective at reducing coughing and soothing mucous membranes. Pair it with cinnamon to reduce phlegm.

Originally used to make candle wicks, the mullein flower has been used for centuries to treat asthma. It’s utilized mostly via a tea or extract. The plant is also known as lungwort and shepherd’s staff.

When Eskimos were found to have low asthma rates, some scientists attributed this to their consumption of oily fish with lots of omega-3 fatty acids. Taking purified fish liver oil or krill oil can help control the allergy-induced lung inflammation in asthma.

Help in Your Crisper?

Beta-carotene is the substance that gives vegetables such as carrots, sweet potatoes, peppers and squash their bright colors. During digestion, beta-carotene is converted to vitamin A which has been shown to help control asthma symptoms.

Flavonoids come from the breakdown of fruits and vegetable in the body and help block chemicals associated with asthma. They act as antioxidants by preventing free radicals from damaging cells.

Caffeine was first recommended by Dr. Henry Hyde Salter in the 1850s. He thought that stimulating the nervous system was the reason for its efficacy, it does work on another level. Caffeine is broken down into theophylline, a bronchodilator that was widely used to treat asthma in the 1970s and 1980s.

Magnesium in the form of magnesium sulfate is used intravenously in emergency rooms to treat acute asthmatic events. It inhibits muscle spasms and increases the body’s production of the anti-inflammatory nitric oxide.

In addition to vitamin A, vitamins D, C and E strengthen the immune system as well as suppress asthma’s exaggerated immune response. Vitamin D can be found in dairy, fatty fish, and cereals. Vitamin C is in citrus fruits, Brussels sprouts, broccoli, and tomatoes.

Vitamin E contains the antioxidant gamma-tocopherol, which targets severe (neutrophilic) asthma. It can be found in nuts, seeds, and green leafy vegetables.

Many supplements are thought to have an efficacious effect on asthma because they either are anti-inflammatory (gingko biloba, licorice root), or are known to relax the muscles of the airway (ligusticum wallichii, sophora flavescens). Butterbur has long been used to ease allergies, and dry ivy leaf extract helps clear mucus.

Acupuncture is widely used in China to help regulate breathing. Studies have suggested that it might decrease medicine dosages needed to keep asthma under control, but more trials are needed to make a definitive statement.

In moxibustion, either cones or cylinders are used to burn moxa mugwort onto the skin at acupuncture pressure points. In the small groups that have been studied, it is shown to be more effective when paired with massage.

Both acupuncture and moxibustion have a low incidence of side effects.

The idea of chiropractic is to adjust the spine and, in effect, the nerves, allowing the thoracic cavity to expand more easily when breathing. This non-invasive treatment also claims to help alleviate obstructions in the lungs and airways.

When carefully and accurately prescribed by a well-trained, homeopathic doctor, homeopathic remedies can provide significant relief from acute and chronic asthma. Worldwide clinical research has proven the effectiveness of homeopathy for asthma. Find a homeopathic physician near you at https://homeopathyusa.org/member-directory.html